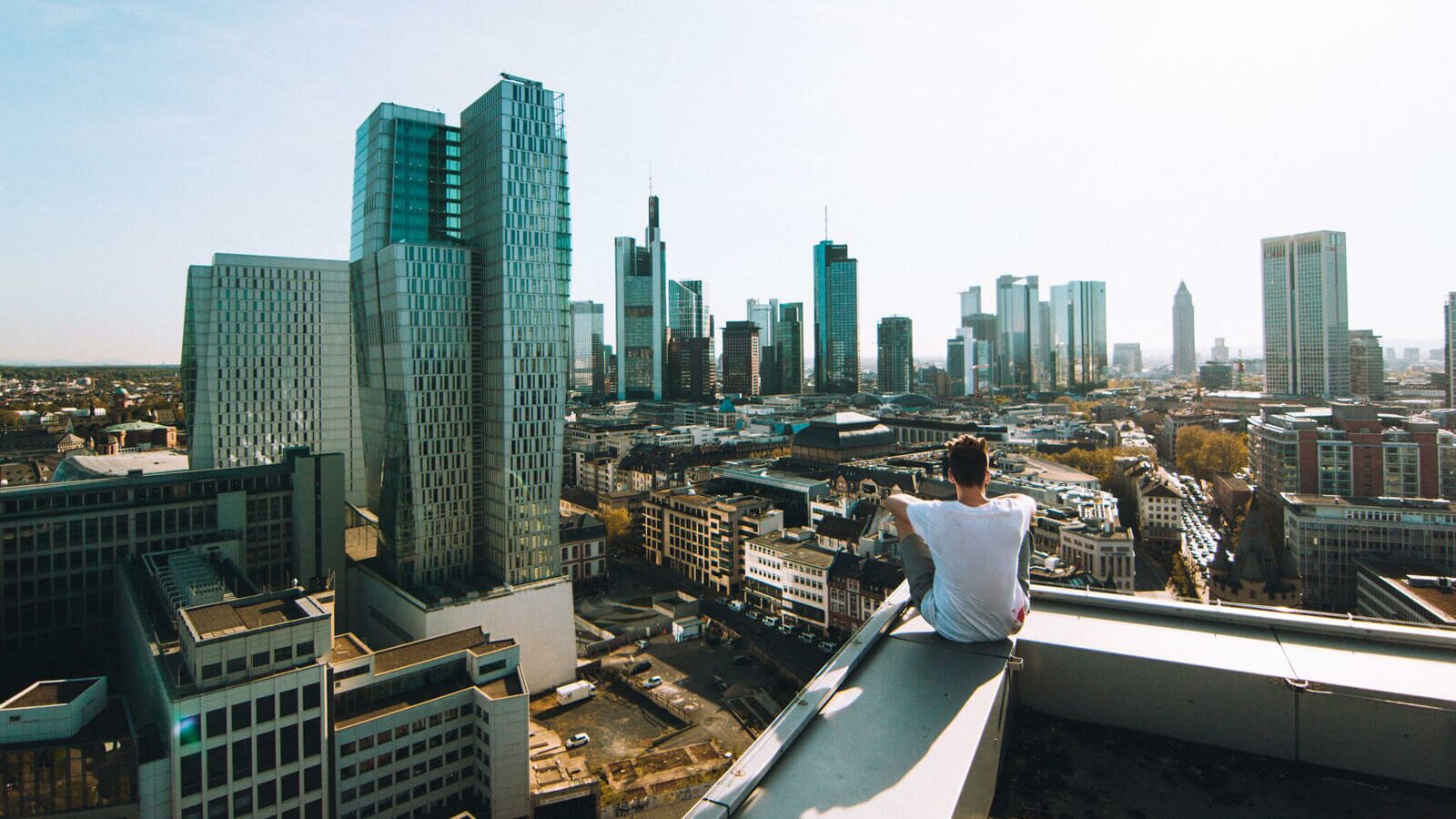 In today's world, photography is everywhere. We are over-saturated by looking at images all day long. The average attention span is less than 10 seconds now. But trust me, there are artists who deserve much more of our time. Jonas Skorpil is one of them. I met him and we spoke for a couple of hours.

The first time I had heard about Jonas was, when I saw incredible photos of him sitting on the edge of skyscrapers in Frankfurt. Being the only city in Germany with higher buildings and a rather small downtown area, people from Frankfurt love their skyline. But only the terrace of the so-called Maintower is open to public. So seeing the high-rise buildings from totally different perspectives was truly fascinating.

Jonas and his friend Johannes had an exhibition with such photographs two years ago, where we spoke for the first time. Jonas is calm and modest, yet very ambitious. Not the type of person who speaks about planning to do something someday. Jonas takes action. I find this attitude very inspiring.

Jonas used to parkour. This urban sport where people jump over walls and use railings or gaps between walls as obstacles to conquer. He climbed walls, climbed higher and higher and soon there was a rooftop. Views from above fascinated him a lot. So he took images from up there. The great feedback he received to these images, were a big motivation for him.

Today, he is not roofing anymore, especially not at nighttime and always with permission, only. But heights still fascinate him a lot.

A passion for travelling

Travel and lifestyle photography is what interests Jonas the most these days. He discovered that there are beautiful places in Germany, too: the Mosel area, Saxon Switzerland, Harz Mountains or the Berchtesgaden area. This might not sound astonishing if you come from other countries, but many German people travel to foreign countries only, without knowing their own country at all.

In weekend trips, Jonas travels to these places with a couple of friends. Like a roadtrip, a timeout. Being in the perfect mood for lifestyle images, he photographs everything from landscape to product shots. Recently he became a so-called 'Micro Influencer'.

He explained to me that even though the number of people following him on instagram isn't very high, he was still able to build a lot of trust with clients. Having a faithful group of followers means there's rather quality over quantity. This stands out and leads to companies asking him to produce photo campaigns and advertise for them. To Jonas it is always important to display products in suitable surroundings. He is very selective and I believe, this is a good characteristic.

Just as much as Jonas loves to travel within Germany, he's drawn to discover other parts of the world. In 2016 Jonas he flew to: South Africa, Barcelona, Santorini and the USA. The trip to Cape Town was special. Being commissioned by a vineyard-owner, he spent a whole week in the countryside. There Jonas made photos for the company's website, took pictures of all different bottles, captured the landscape, machineries, people and the whole atmosphere. He also was on his first helicopter ride, photographing the vineyards from above.

Word-of-mouth recommendations lead to jobs like this. People loved what he was creating and were very happy with his output. As I have worked with Jonas as well, I have to say, I never met anyone before who operates a camera at such a speed.

Jonas always shoots in manual mode. Always. He wants to have full control over aperture, speed, iso and white balance settings. When he comes to a scene, he quickly takes a photo, checks the result on the display, turns some knobs on the camera and does this process over again. After three photos, the settings are how he wants them. Seeing this process with my own eyes, it felt a bit like when someone solves the Rubik's cube and your jaw just drops.

People are astonished that the photos already look so good on his display. He claims it comes from setting the white-balance a small bit warmer than the camera would do in automatic mode. Jonas doesn't use presets or styles inside the camera, a Canon 5D MKIII, and his post processing is very basic as well. Only when it comes to skin tones, color grading becomes more difficult. With landscape photography, it's never too complicated, he says. Noone complains if a tree looks more greenish or yellowish.

Flying drones was something, Jonas did from the very beginning. Years ago, he bought a DJI Phantom 2, attached a GoPro to it and built his own remote control. It helped him a lot that he was studying mechanical engineering, but still it wasn't an easy thing to do.

Now, he is quite experienced and purchased a DJI Phantom 4 last year. Flying drones isn't without a hassle, as you always need a permission, especially when filming commercial.

Born 1994 and raised in Frankfurt, Jonas photographs for about five years now. He studies mechanical engineering and has a small photo studio. But most of the time he photographs outside.

When I asked Jonas about his workflow, if he comes with a concept and works through it, bit by bit, to my surprise, he answered: no. When photographing he feels free, he feels detached and yet is in a tunnel, fully focused on photography. Ideas come up as part of the process and being spontaneous feels both adventurous and exciting to him.

But then Jonas added how much work he puts into his passion. He is constantly looking at the photographer's scene. With hungry eyes. Checking out the work of other photographers from all genres. Inspired by the visuals of the German Roamers,Florian Schüppel and Marco Justus Schöler, just to throw in a few names.

For 2017 Jonas plans to graduate from university and to push his artistic work on his instagram account. He wants to demonstrate what he's capable of and dreams of gaining many photography jobs as a result of this. Jonas is an open-minded and congenial person. It is lovely to see with how much energy he works on fulfilling his dreams. I wish him all the best and look forward to seeing what he will create in the future.