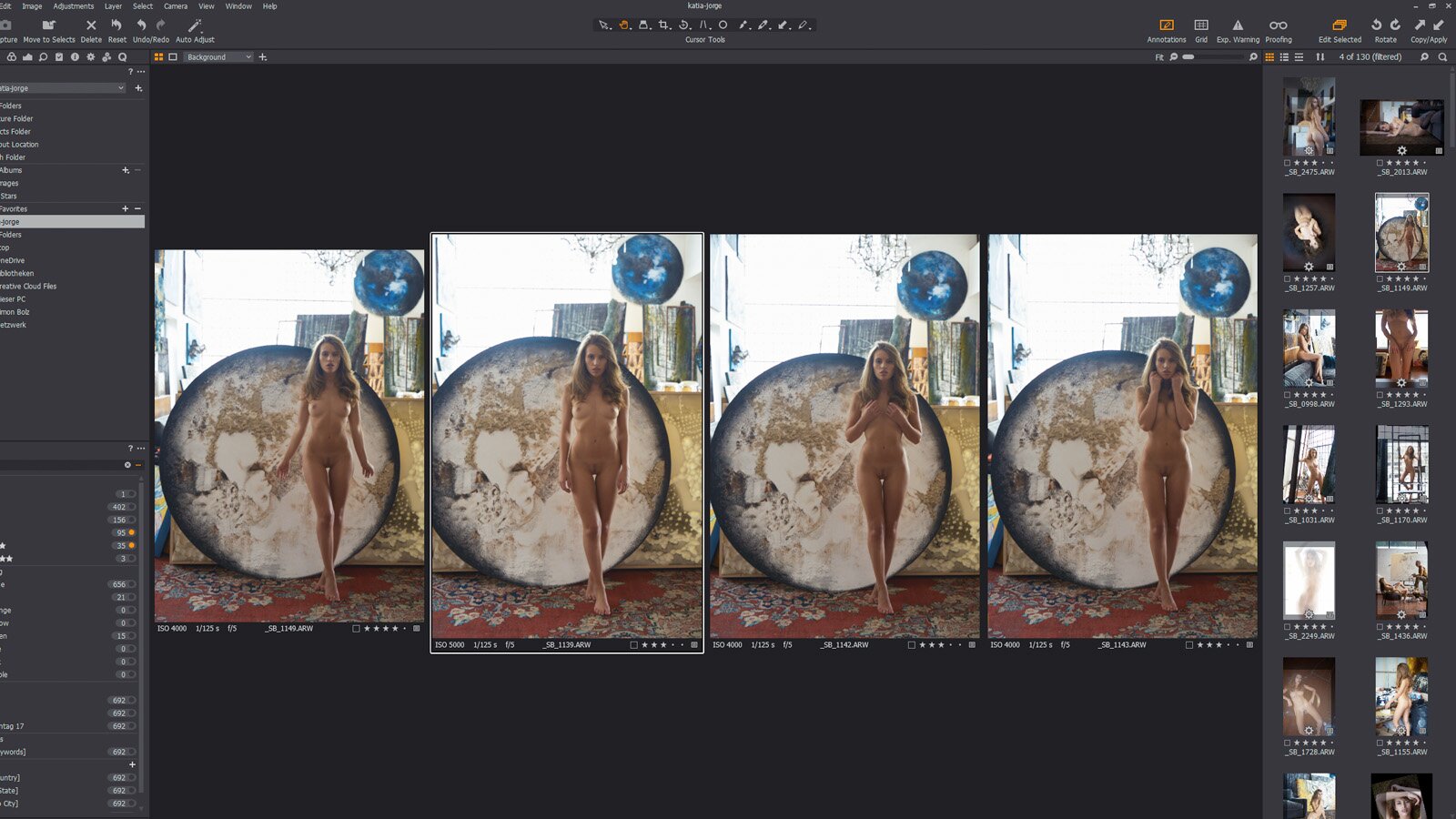 The art of selection

During a shoot I usually take hundreds of photographs. It's a challenge to choose the best ones and to put them together as a nice series. I really like doing this, but I also realised that the selection process has a lot to do with personal taste. Even though preferences are different, there is no right or wrong. But I use certain rules when I make my compilations.

I made up my mind on how to write such an article. It's almost impossible to write it neutrally, because hardly anything is as subjective as taste. So if I hand my photos to someone else, an editor for example, no-one will ever make the same selection as me.

That is also because my choice is characterised by a memory connected to specific images. I will always be the only one knowing how long it took until I was satisfied with a certain scene or how special the mood was when taking another frame.

When you work in the field of nude photography as long as I do, you can feel that you are repeating yourself. And on my inside I fight against it. So, I will always make my choice on images that kind of look new. New in terms of a new Simon Bolz photo, not new as if I invented the pose or style.

In general I would say, 50% of what I shoot is planned, the other half happens spontaneously during the shoot. This gives me a good starting point and helps me to create a large output, but at the same time, I have enough freedom to experiment and act impulsively to what happens on set.

Each shoot is different, so are the results. One day the weather is great and gives you fantastic light. Another time it is so overcast, you have a very flat lit scene. There are many things that influence a shoot and you always have to cope with what you get. I really like these challenges and it gives me confidence to know how many shitty situations I managed and turned into nice images.

When my selection is down to around 30 pictures, I start combining the images to form a series.

As this all souns very theoretically, I decided to write this article about a specific set. This makes it easier to describe my motivation for the selection and compilation. Let's take La Muse, a series that means a lot to me. I photographed Katia in the house of a famous Portugese painter and scupltor.

We did not know each other and I had not seen the location before the shoot. This was all arranged by a very friendly admiror of my work (Obrigado, João!) and as I wanted to break my routines, it was the first shoot ever where I was rather unprepared. It felt like going on a blind date, but with the location.

I had known Katia already from two previous shoots which made things easier for me. Also, my idea was just to photograph the series Dreaming of Me, some photos for a commissioned art project and the cover for my book Sublime.

Then, I was over-whelmed by the wonderful large house of the artist and that he allowed me to move around freely to photograph wherever I wanted. So I decided spontaneously to shoot the series La Muse. During the shoot I already had the idea for the name of the series (which barely ever happens).

I struggled to get the clutter of the big house together as a series in my head. There were several couches and paintings all over the place. Not to mention the goats and peacocks that were running around.

When I try to form stories, my brain limits me and asks me for a specific story. I need to take a big step backwards then and tell myself, it's not about a story, it's only a theme that holds the series together. And it's a starting point for the inner cinema of the viewer. But in the end, it is a beautiful woman that matters. And a nice compilation of artistic photographs. So here's why I chose what.

I am constantly thinking in a pair of single pages or double pages (when photographing in landscape orientation). Most of the time, it's the single pages. One left, one right. They need to communicate with another. I see them as a unit.

The opener can be a spread page (it usually is in print magazines) or two single images. I went for two singles and as the whole series has a mysterious spell (for me), I introduced Katia to the viewer by throwing her in like a rocket hitting the ground. I shot her through a round glass ring which goes together with the round planet that you see on the right side (with a portrait similar to how Katia looks in the left frame). Katia has landed like la petite princesse.

It's this kind of poetry that I feel when making my choice.

She has landed with a big hello. Here I am. Look at me, boy.

For me the series circled around a stunning young woman on the couch. But I wanted to use the whole space, so the couch is just the base where she returns always. The place where you can imagine it to be nice and cuddly, if you know what I mean.

Offerig a perspective where the lines lead into the deep is very nice to have. Adding perspective feels refreshing as most of the time, I focus on the subject only in my photos.

Now, comes a closeup of Katia. Her body lines and shapes, supported by her arms and hands, form lovely curves and frame the focus point. And at the same time, the guy from the painting in the background forces you to look at him. Is this Salvador Dalí? Why is he asking for attention from back there? And what's with the Aladdin and the magic lamp there? Or is it just a pot of tea? I really like such distractions in a mysterious surrounding like this place.

Katia rushed downstairs to the working place of Jorge, the painter. This leads to the question if I put photos in chronological order of how I took them. Actually, most of the time, I do. More or less. So, it's not the precise order, but roughly they are sorted by time.

A thoughtful and awaiting Katia on the left, a playfully hidden behind a curtain one on the right. She is looking away and looking towards the observer. Another play with contrasts. Things start to build up.

And I was very happy that I had thought of the connecting shot when I was in Porto. The one you see on the right which is the inspiring sight from the painter's point of view.

You will understand later why some photos are in black and white.

Now, I decided for a photo with Katia and the brushes in a real dirty atelier environment. Those contrasts of a pretty girl in an ugly space is a classic. Like a girl in an abandoned building or even the contrast of skin and large industrial surroundings. It emphasizes the beauty of the female body and the soft skin.

As I have a photo with Katia seen from behind here, you feel more like a voyeur when looking at the image. Your mind is more relaxed and it allows you to look at her longer than if she faces you. There are many photos in this set where she looks into the camera, so I needed to make sure to balance it out with such a shot, too.

And there she is again on the right. Katia, the eye of the tiger. I love this image for its strength. The strong looks, the pose and as for my composition, the chosen colors in the frame. These are unaltered and the tones just go together so well.

If you ask yourself why I placed Katia in front of the couch and if this is available light. Yes, it is. There was light falling through a small window in the high ceiling. And I absolutely love to work with directed light from the top.

Sometimes, I want to connect double pages and give them a logical order. Then again, I want to interrupt and change the scene. It's always about variation. Now, it was time for a landscape shot. A portrait from above. I love these, they usually look relaxed when the model is lying down on a carpet, like here. And it's all about her eyes.

I wanted to slowly add more erotism to the series, so I went for two seductive poses.

The undecided playfulness, the innocence and the reduction does it for me in these photos.

Sorry, back to my images. Building up sexual tension worked very well for me. There are not many series where I happened to have achieved it in such a subtle way, I believe.

On the left, Katia presents her behind with an arched back. Not too much to look cheap, but the sliding stocking confirms, this is about sexuality and not perfect beauty. It's a photo of a woman in anticipation.

As the passion was at the height, I need to slow down in the next images. A dreamingful woman on the left, photographed from the outside with the reflection of a window. It holds a certain distance, has a voyeuristic appeal and the facial expression speaks of satisfaction.

The right image is something that I always like to do: to photograph the big scene and show the model only as a small part of the scene. It is something soothing for the viewer. Like in childhood when you had to search something in a scene of a children's book. And in this case, it's a reminder that Katia is inside an artistic place, going wild.

Needless to say, it was all about the beautiful curves of her behind and the bend legs. Classical female shapes that have inspired guitar builders and... oh, I am drifting away.

And so is Katia in my final scene. A pure, reduced image with the thoughtful use of colors and accessories. It's the grande finale and again she is shaped like a launching rocket (in terms of my own poetry). So it comes to a full circle from the first to the last picture.

This was the break down of why I put the images together the way I did and what I thought when making this compilation. But of course, it doesn't answer the question of why I did not select one of the 81 further images from my outtakes.

For the web, I want to produce series with a maximum of around 20 photos. For print, there are less. The series La Muse only has six pages in the book Sublime. I believe each media is used differently and a printed product is viewed much slower than online, which is why I make such a difference in the amount of pictures in my compilations.

Basically these 18 photos in my online series of La Muse were the best compilation I could make. It took me several days to select and compile the series. A lot of back and forth. Replacing, choosing different shots. I slept over it and re-thought the next morning. I carefully cropped the images and took care of the skin retouch. I always allow myself to invest a lot of time for such important tasks.