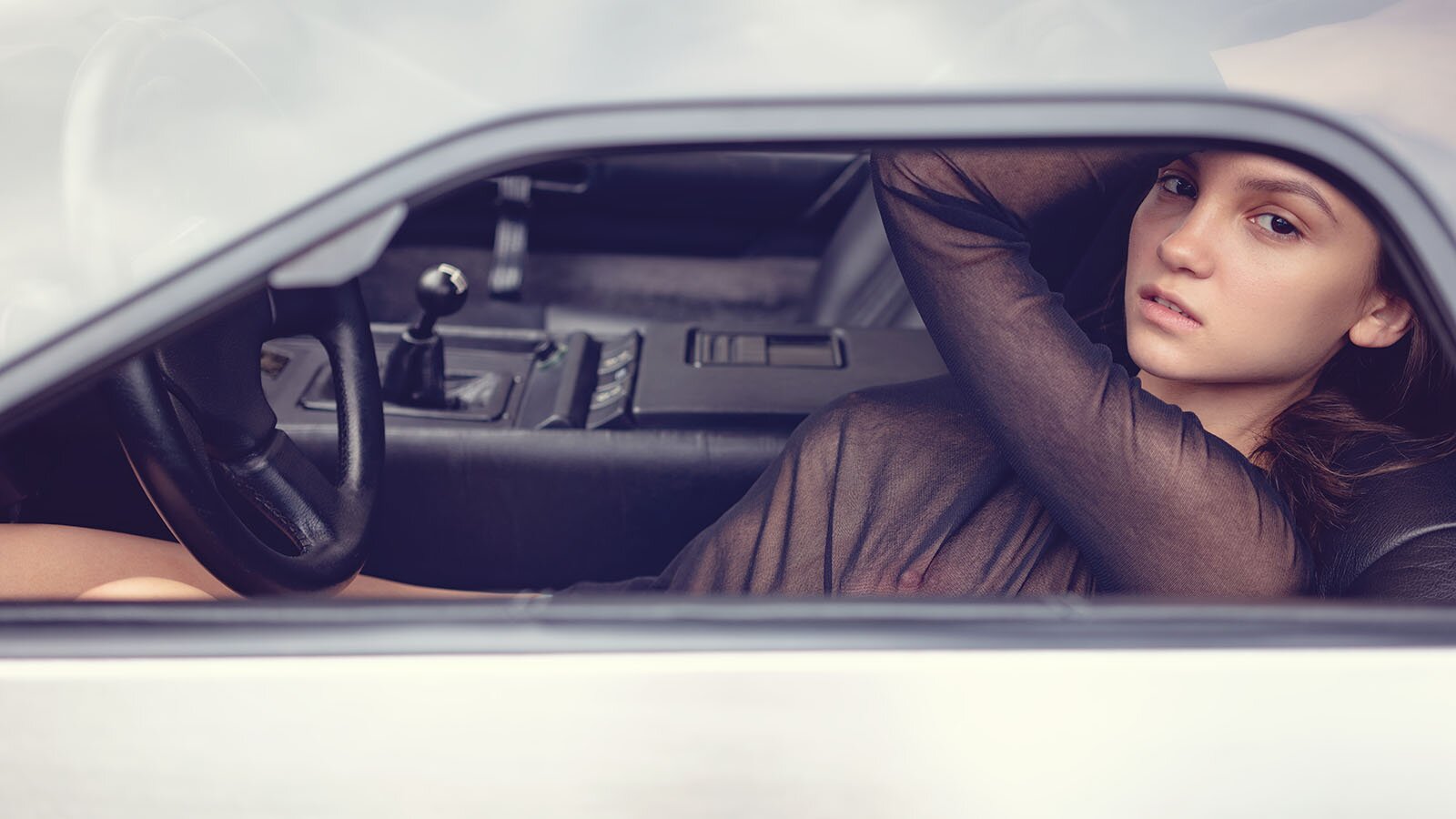 Girls and cars, a classic theme that always works. I like stereotypes and find it challenging to work with such themes. Especially because cars are so small on the inside, difficult to pose for a model and not easy to find good angles to shoot from. But when you run into a beautiful DeLorean DMC-12, you know this is going to get great.

Of all the shoots I did for my new book Sublime, this was the most complicated one, though. A pure nightmare in planning. It was so awful that at one point actually the idea of giving up on shooting nudes came to my mind.

In January I had discovered the car parked in Frankfurt. I put a note behind the windscreen wipers and as luck would happen, the owner contacted me and we arranged a shoot.

I quickly found a blonde model who was eager to do this shoot with me. I booked her flight and hotel. Now, I only needed a location.

Of course, you can just drive anywhere with a car and shoot. But when you want to publish the images, it's better to have a location release. And especially when shooting nudes, I prefer to do it on private grounds.

The car owner was very helpful with searching for locations. We agreed on shooting in a stone quarry near Frankfurt. But they said no for insurance reasons.

No problem, there are more quarries. So, I tried three more. All denied.

Then I thought, we could drive the car into a hangar of a small airport. The responsible person from the airline agreed, but he had to ask for permission from the airport owner. And he said no. Because of nudity being involved.

I don't give up easily, so I contacted a real estate manager who had a big villa with park for sale in Frankfurt. I asked if we could shoot only in front of the house. They called me back within five minutes. But when they heard the details of the shoot, I received another (guess what): no.

This was not going well. So, I had to make new plans. And while I was at it, the model I had booked, told me, she won't shoot nudes any longer. Well, but that's my type of art. I am not a fashion photographer. So, I had to cancel her flight and hotel. Now, I had a car, but no model and no location. Meanwhile it was end of March and I realised that it never ever took me so long to organize a shoot.

I contacted two more industrial companies that have large sand storages in the harbour of Frankfurt. The assistant I had on the phone was all on fire when he heard about a DeLorean. But the boss gave me another "no".

Good news, I had found a new model. Maria from Moscow. 23 years of age, great body. Newcomer model. So, I was motivated to search for new locations.

Why not try top decks of parking garages? There are many of them in and around Frankfurt. So I contacted those. It took only hours until the first of them replied with the answer that I had feared. And only a day later, I received a call from another company that owns many garages in Frankfurt. The manager told me, they would not allow a shoot. I replied, that's sad but of course, it's their decision. And I would have paid for it as well. Then, this guy yelled at me through the phone "We don't want it!". It was so ridiculous and left me empty on the inside.

Two more negative answers later, I decided to give up on this. It was not working out this way. So, I took my bike and cycled around to discover places under highway bridges. I discovered some cool sposts and and drove there again to do a light test with my own car. The bridge gives shadow from above but lets light in from the sides. Quite nice light to work with. Finally, I was seeing light at the end of the tunnel!

I hooked up with Jonas Skorpil who is great in flying with drones. He did the video of Maria driving the DeLorean, too.

And the shoot went smooth and easy. I had carefully prepared the styling, from silver heels to underwear and cat ears. And I bought a model of a DeLorean.

The DeLorean strikes a lot of attention, so I wanted to act Maria arrogant and look absent like a fashion model. She did very well with this. Two hours later, the shoot was done. I was overly happy with the images.