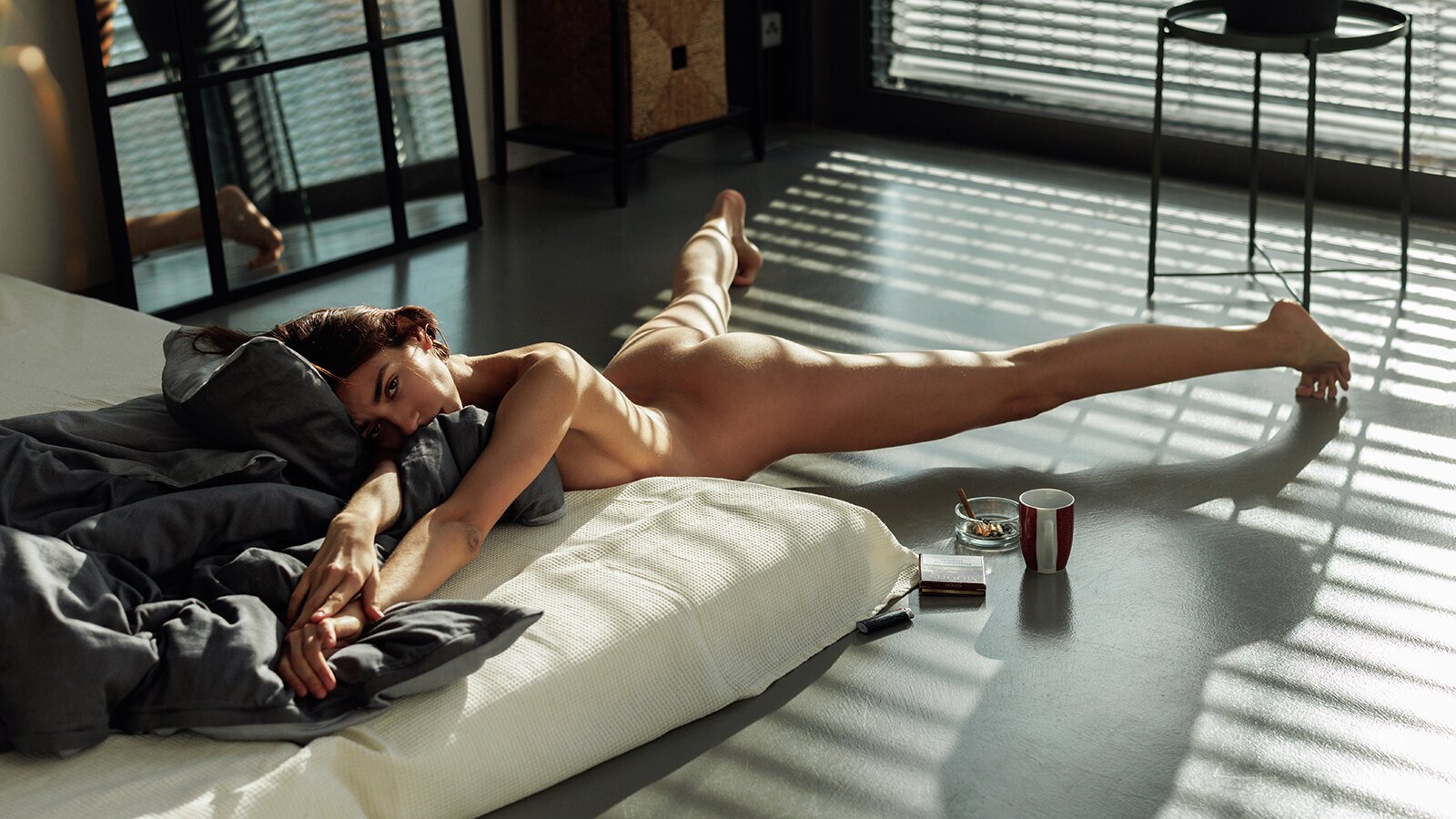 When we met on the street in front of the café, I immediately noticed that Hannes is at rest within himself. The photographer from southern Germany radiates composure and thus conveys a sense of security that is helpful in his work as a nude photographer. In our 90-minute conversation, he revealed surprising things to me about his way of working.

Due to the pandemic, the section of my blog where I introduce interesting creative personalities has unfortunately been somewhat neglected. So I was very pleased that Hannes Walendy spontaneously had time to meet with me in Frankfurt.

Because everything is still the same: I see many photos of talented photographers every day and then realize with surprise that I know nothing at all about these people. I simply scroll the timeline too quickly. Yet the photos tell me that the person behind the camera has put a lot of thought into his work.

Hannes was born in 1961, which probably explains that he brings self-assurance with him and you can sense that he no longer has to prove himself to others. I found it very pleasant to talk to him. He speaks softly, without being introverted. And he has quite a lot to say.

Hannes Walendy started with photography about seven years ago. At that time he photographed dressage horses. He used to ride horses himself and is associated with equestrian sports. So it made sense to photograph horses and their riders professionally.

However, the course of a dressage competition always follows the same pattern, so that he relatively quickly lacked variety. Therefore Hannes began photographing in nature.

To my surprise, he told me that he learned how to work with natural light through close observation while photographing flowers and blossoms. For example, that backlighting looks flattering. What works on a small scale must work on a large scale, he thought to himself.

And so he changed genres again and now feels he has arrived. Directly into the fabled "royal class" of nude photography. Hannes didn't think it was necessary to be afraid of such a task. His sense of aesthetics and female beauty guided him. He simply wanted to tackle the challenge of photographing the beauty of women.

He favors the work of Dmitry Chapalla because of his reduced black and white style. And he is inspired by Ilya Rashap's work with light and fascinated by the noble color look of French photographer Martial Lenoir.

Through fashion magazines like Elle and Vogue, Hannes thinks in series from the beginning. He prepares his shoots with a mood board to convey to the models what he envisions in a location and how he would like to stage the model.

In doing so, he first creates a situation. A setup such as a student room with a desk, bed and accessories. In addition, a description of the role that the model should take. "You're actually a lazy student and not that interested in studying", Hannes gave me as an example.

Then he waits, is a silent observer — as he was in his early days when shooting in nature. He rarely interrupts the model, wants to see what she makes of the situation and press the shutter at the right moment. In doing so, he proceeds very cautiously and takes only about 500 shots in a three-and-a-half-hour shoot.

He composes the motif down to the last detail in the camera. He takes his time, for example, to find the right perspective and the right crop.

The first ten minutes are crucial, or at least not unimportant, in a shoot, Hannes told me. Here he must already succeed in taking pictures as he has imagined them. Because he shows the model the pictures from the beginning, so that she gains confidence, feels comfortable on the set and remains motivated.

As a photographer, he only interrupts the shoot when he feels the air is out and he needs to get the flow going again.

Of course, it's easier when model and photographer already know each other. Therefore Hannes has been working regularly with five to eight nude models for years. The familiarity that develops helps produce better and better images over time.

Many people have a false image of photographers.

When a model sits with spread legs on a couch and Hannes cleverly chooses an angle that makes the picture appear sensual but not obscene, then this photo does not give an insight into his private life, but it is art. Here, outsiders sometimes don't understand how to differentiate. Hannes laughs and says you could call his work platonic nudes.

His preferred lens is a fast 28-70mm zoom lens, which he uses to take most of his pictures. For portraits, he also likes to work in the range of a 200mm focal length.

I was very surprised when I learned how Hannes works with his Canon R5. He sets the camera to black and white mode, so he sees the world through the viewfinder in black and white. This helps him to see light and contrasts better and to capture structures. This is really essential for his work.

It is only in post-processing that he decides whether he wants to make the image colorful after all. As the RAW data contains all color values, he is free to take this decision in post production.

Hannes takes his time putting together his photo series. He creates a look in Lightroom. But then he likes to sleep on it and change things again the next day. This process can sometimes take several days to finish.

When the colors or gray values are right, he needs no more than half an hour per image for retouching. He likes the images to be as natural as possible and only liquifies a body if, for example, panties that are too tight cut the skin unsightly.

Working indoors makes it easier to create intimacy. Security provided by an enclosed space allows a model to let go and immerse herself in a story. Hannes' comfort zone is 2 to 3 meters (6 to 10 feet) away from the model.

When he plays Cuban jazz or tango music on set, the rhythm works as a pulse generator and supports the athmosphere quite well.

I really felt how Hannes burns for photography. He has fun when shooting and therefore recognition is not the biggest motivation for his work. He doesn't care about likes and followers on social media. No one knows the secrets of Instagram's algorithm anyway, and a worse picture can get so many more likes than a great photo.

Instagram is only a temporary hype, says Hannes, and I very much wish he was right about that. In the long run, people won't let themselves be told what they can see and what is censored. If there ends up being more advertising than photos, new platforms will open up for creatives.

Every year, Hannes Walendy produces an illustrated book with around 100 pages. Each filled with his best pictures of the year. The circulation of his book is 1 and the high-quality book in gigantic 30x40cm (12x16in) then goes into his own bookcase. Over the years, he has thus been able to witness his own further development. On paper and not on the screen, which gives the photos a higher value.

I really enjoyed the conversation with Hannes. His easy-going and entertaining manner was just very pleasant and warm. I would even claim to feel this honesty and warmth also when looking at his photographs. Maybe you can feel this, too.

Many thanks for the meeting, Hannes! All the best for your next photo sessions.

Hannes is always looking for new faces. He shoots in his studio in Metzingen (Stuttgart area) or on travel through Europe.