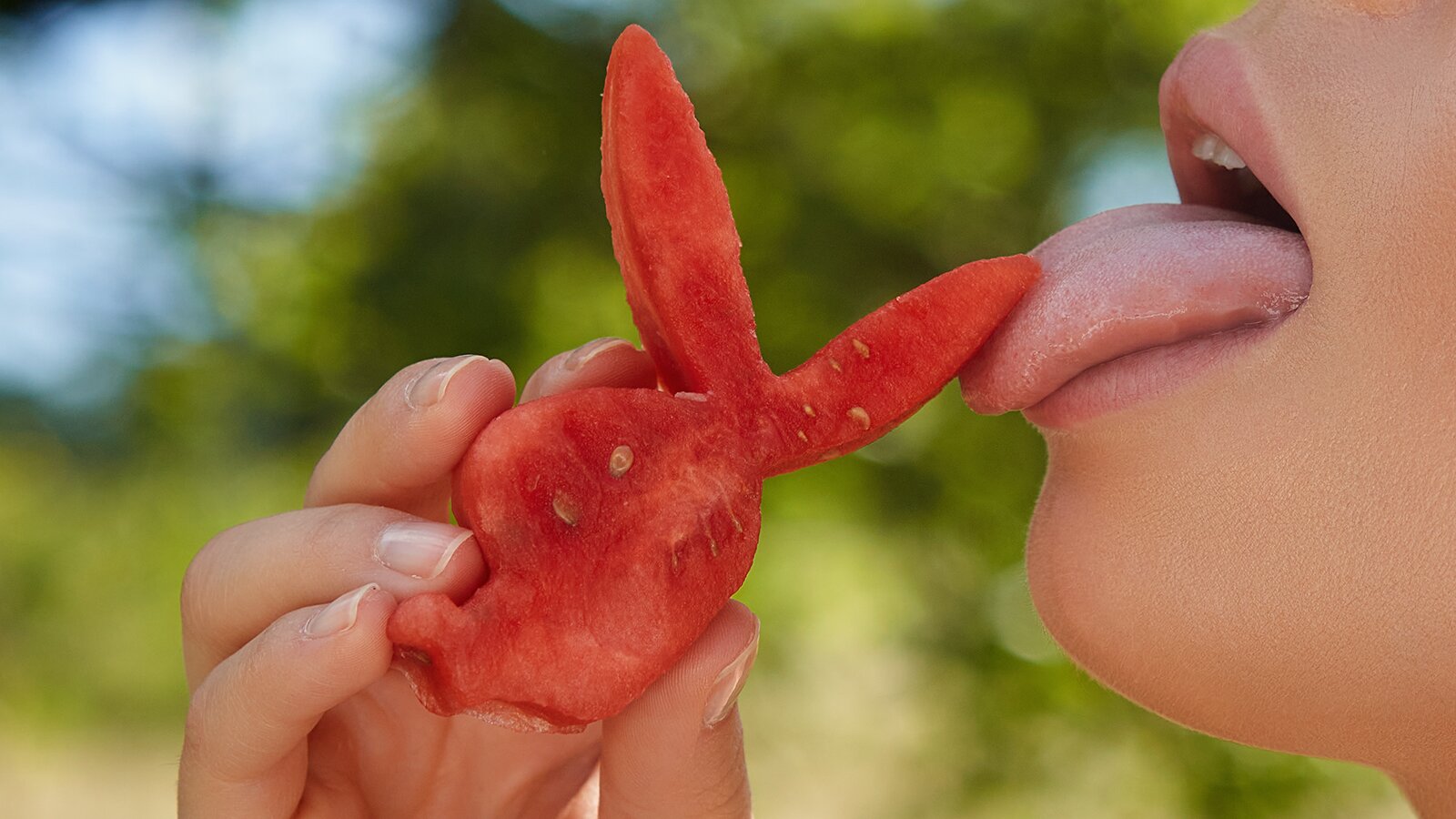 For the 50th anniversary of Playboy Germany, I was invited to design one of 50 cover motifs. For me, this was a huge honor and a project that I was really excited about. I was given a free hand in the design. Only a reference to Playboy had to be recognizable.

Fully motivated, I immediately started the project. As always, the deadline was tight. I had less than ten days for this job. So I didn't want to put anything on the back burner, and it was better to go full throttle right away.

First I brainstormed and wrote down everything I could think of. It is important not to judge any idea. Just write down what comes into your mind. It's not easy for me to do that. Directly I have thoughts like "Can I even create this?" or "Has this perhaps been done before?". But none of that matters at first.

First of all, out with the thoughts. My paper quickly became full. After that, I thought about what I thought was needed for a cover. I decided that my cover should be like this:

These are quite a lot of requirements and from my list of ideas I could cross off quite a few ideas immediately. They were either too boring, too sexy, too weird or simply not me.

One idea came spontaneously and felt very strong. Sometimes the first ideas are the best. So I immediately set out to realize it. I took a 3D-printed bunny logo and stuck it to a window pane with tape film. Then I held a prism in front of my lens to create a photo with lots of bunny logos.

It's a principle I've used more often in my work, and so I had a photo straight out of Ibiza (from May 2022) with a model by the sea.You can see nothing but a silhouette and the model in front of the low sun. The prism created beautiful overlapping curves. And if you look closer, you can see that the arms of the model somehow have the shape of the rabbit ears.

I discreetly merged the two motifs and used colored brushes to add more highlights to the motif. Not much post production to be honest. Pretty much only a double exposure.

But is this really recognizable as "Simon Bolz"? Is this Playboy? Could this look like bombs dropping from the sky? Does it look like CGI and not real photography?

I had some doubts.

Generate lots of options. Refine the best ones until you have something you like.

But I knew right away that I wasn't going to design only one motif and then the job is done. If I do something, then I do it right. So I kept thinking and knew that I would do at least two more designs to find out which looks the best.

Idea number two was to put a bunny ice cube in a champagne glass and photograph this as a close up with a macro lens. Water bubbles and ice cubes actually always look good up close. To give it another Playboy reference, I put Playmate Chiara (from my first shoot with her) in the background. By shooting macro, I knew I could get her in total blur with no strange artifacts. A nice play with closeness and distance. The focus is on the playboy bunny. And there always is champagne when you have something to celebrate, right?

For my third motif, I initially just wanted to buy a gingerbread heart from the fair that says "Happy Birthday". Plain and easy. Nothing artificial. I congratulate Playboy on its anniversary. Behind the heart a naked Playmate to have a reference and some cheekiness. In the short time it became a challenge to work this out.

I called Playmate Leni (Playmate August 2021) and we arranged a shoot. I asked her for natural nails and basic makeup only.

It was much more difficult to organize a gingerbread heart with "Happy Birthday" written on it. I went to two different festivals, to a total of eight candy stands. And everywhere there were only "I love you" and "Grandpa" hearts. When I asked if they could custom label one for me, I only received a "We only do that at the Christmas market." I couldn't wait that long.

Fortunately, Leni found an appropriate gingerbread heart in southern Germany and bought it directly. Now I was still missing the reference to Playboy. Actually I wanted to bring Leni's pubic hair in rabbit ears form. In Photoshop of course. But she is currently shaved. I then tried to make a bunny toupee. With kinesio tape in skin color and brush bristles.

Unfortunately, the brush bristles looked terrible. I would have needed softer and more curly hair. But a second try wasn't worth it. Cutting out the delicate ears was just brutally difficult.

You have to know when enough is enough!

Now I've tried three more alternatives: cutting out a bunny-shaped popsicle and making it into a Playboy popsicle. Unfortunately, I couldn't make it work. It has become a giant mess and the ice cream I bought simply was way too creamy. The filigree ears melt away too quickly.

Then I cut out a watermelon. The melon looked great. And I swear: the seed as an eye was pure coincidence. But is such a thing good for a photo?

So there was still the idea of my wife. Make marshmallows and cut out bunnies. We made marshmallows together (for the first time). That is not difficult at all. You just need a lot of powdered sugar, a lot of gelatin and a little water. Add a little food coloring, mix everything and chill.

Only cutting them out is a huge hassle. A round shape would be easy. But those bunny ears! They drive you crazy. The marshmallows are so fluffy, it's not so easy to work with. I dried them in open air, in the fridge and in the freezer to see which method works best.

Now, it was finally Saturday and I drove to Southern Germany for my shoot with Leni. We met halfway on a beautiful summer day, in nature, in the village where I grew up. It was wonderfully quiet and I visited a meadow where I was last 30 years ago. Crazy, isn't it? I knew I wanted a German looking landscape blurry in the background. German nature, because it's 50 years of Playboy Germany.

The thing with the gingerbread heart — it just didn't work. It just looked silly. Not at all like I had it in my head. So, I only took ten shots and knew this wasn't good enough.

But the number one idea by now was the marshmallow bunny anyway. I made six beautiful ones and we photographed them for hours. Portraits with eyes closed, looking into the camera, lustfully moaning, licking and biting the ear of the bunny marshmallow.

Then I unwrapped my one and only cut out watermelon. This looked so much better from the start! The red-green contrast of the colors just looked amazing. Much better than a pale marshmallow.

I wasn't concerned with the logic anymore. After all, doesn't a watermelon somehow symbolize summer? And Playboy is the promise of a never-ending summer, isn't it? See, there you go!

Promise of a never-ending summer…

I took more than a thousand photos with Leni. Over 900 of them with marshmallows. Leni was super as a model and I was very enthusiastic. Everything worked out better than expected. I used a sun swatter to slightly place Leni in shadow and I really love this kind of lighting.

Three days before the deadline

Now it was time to look at the pictures and make a decision. I am good at making decisions. And so it was already clear on Sunday morning at 7 o'clock, that the watermelon will be on my cover.

I selected three final motifs, then decided on one in which one ear of the Playboy Bunny is illuminated by the sun. Now I post-processed the photo, retouched the skin and adapted the colors slightly. My final cover was ready.

I am very happy with this motif. It meets all the above criteria I had set as my goal and it makes a great cover. Later at night (still on Sunday) the editor in chief sent me his approval. My heart jumped for joy.

As I am writing as a photographer and in case you wondered, this image was shot with my favorite lens, my Sony Zeiss 55mm at f/4 and 1/640s exposure time.

Many thanks to Playboy Germany for letting me be one of the 50 artists. It means a lot to me! The issue is out now. 50 artists, 50 different covers. Don't miss this special issue.

You can buy a copy from this limited edition here.

In case you wonder what the other 49 covers by other artists look like, here's an overview: