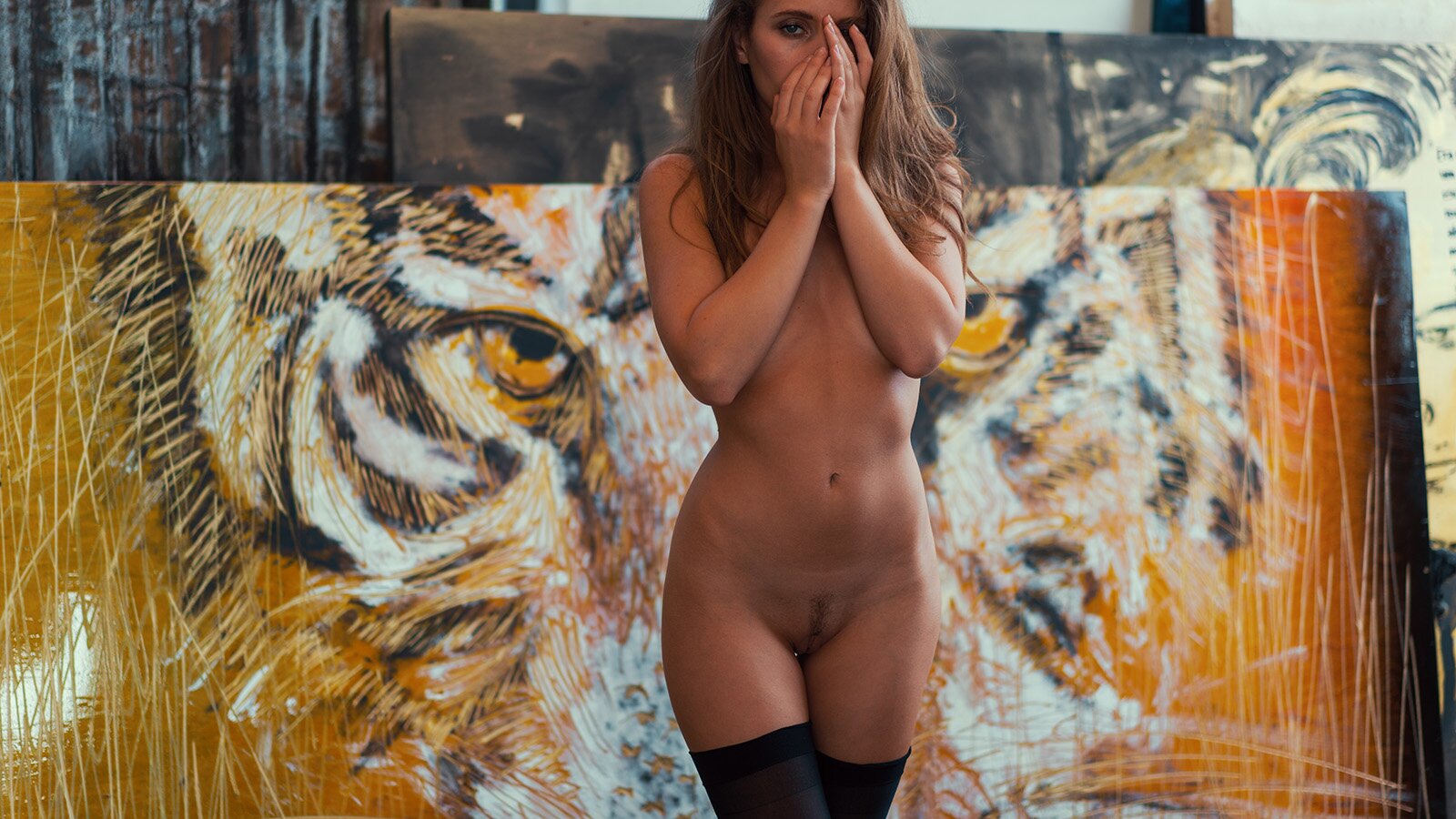 It was the third time I worked with Katia. I had known her since she was 21 years old. Now, she was 23 and looked better than ever. When she walked through the gate at the airport I just wowed. This was going to be a great day. I had booked Katia only for the day (return flight in the evening) and I wanted to shoot the cover for Sublime.

Nobody knew the book was going to be called Sublime, but I did already. And as she stood there in her light summer dress, she left me speechless and I instantly felt, I chose the right title and the right girl for the cover shoot.

This was a special day. Because I did not come to the airport alone. I had a local with me who took us in an Audi A8 stretch limo (the former car of the Portugese president) to the location. I was fine with a change. From time to time, I try to change my routine. So, this shoot was totally unplanned. I had no idea about the location.

But I figured, six hours should be enough to shoot a portrait for the cover of my book. I intended to photograph Katia through a window and this is something that is possible, pretty much everywhere.

We drove along a street that created a small corridor through cornfields. Basically, we had no idea where we were or where we were heading. It was a cloudy morning when we arrived in a small village that had no paved roads. There was a high wall and a metal gate. João rang the bell.

A hairy man wearing a leather vest with nothing underneath opened the gate and warmly welcomed us. My Portugese isn't very good and his English wasn't perfect, either. But it turned out, he spoke French. When he was young, French was taught in schools in Portugal instead of English. So, we communicated in a mix of French, English and Portugese.

It's not about getting kissed by a muse, art is all about hard work.

Even though he is a lot more famous than me, he spoke to me at eye level, from artist to artist. This was very nice. I felt understood and he allowed me to shoot in his house, wherever I wanted. His house was my house. Just, wow!

For warming up, I decided to shoot a little series with Katia inside the house. The story of a girl being the muse for an artist. It was a spontaneous idea when seeing all these artworks in the location. And inbetween I was looking for interesting spots where I could find nice natural lighting for a portrait shot. Because it was all about creating the cover photo.

There were goats in the yard and a peacock running around outside. I found some of his feathers and handed them to Katia. This is how the cover shot emerged.

I was so impressed by the photos we created. Katia was simply beautiful. I knew, this was going to become another story for the book. Eventually, I already had enough great photographs with her from the previous years, but she was just too pretty and the whole place and shooting theme turned out to be so wonderful.

These moments are rare. And hard to capture. Because they require the highest level of trust and you need to know each other for a longer period, most probably. Luckily, Katia and I had known each other for three years already.

To me, this photograph in Sublime is one of the best images I have ever taken.

In the early afternoon, I photographed Katia with the peacock's feathers. There are only three very similar looking images of this. And I photographed with a 35mm lens, not a typical focal length for portraits. I was just snapping away.

But later when going through all the images and alternative shots that could make the cover, I stopped at the image with the peacock feathers. With cropping it tigther, it could indeed become very interesting, I figured.

In spring 2018, I invited Katia over to my place in Frankfurt and presented her the images and the cover shot. She was the first to see how she'd look. And was impressed that the actual portrait on the book is larger than her head in real life.

This became my last shoot with Katia. She stopped shooting nudes in the meantime and I feel very thankful for having had the possibility to accompany her nude modeling career. We experienced unforgettable moments together and the essence of it is in my book Sublime. This feels wonderful when you know you have picked the right model for this. Katia is an amazing woman.