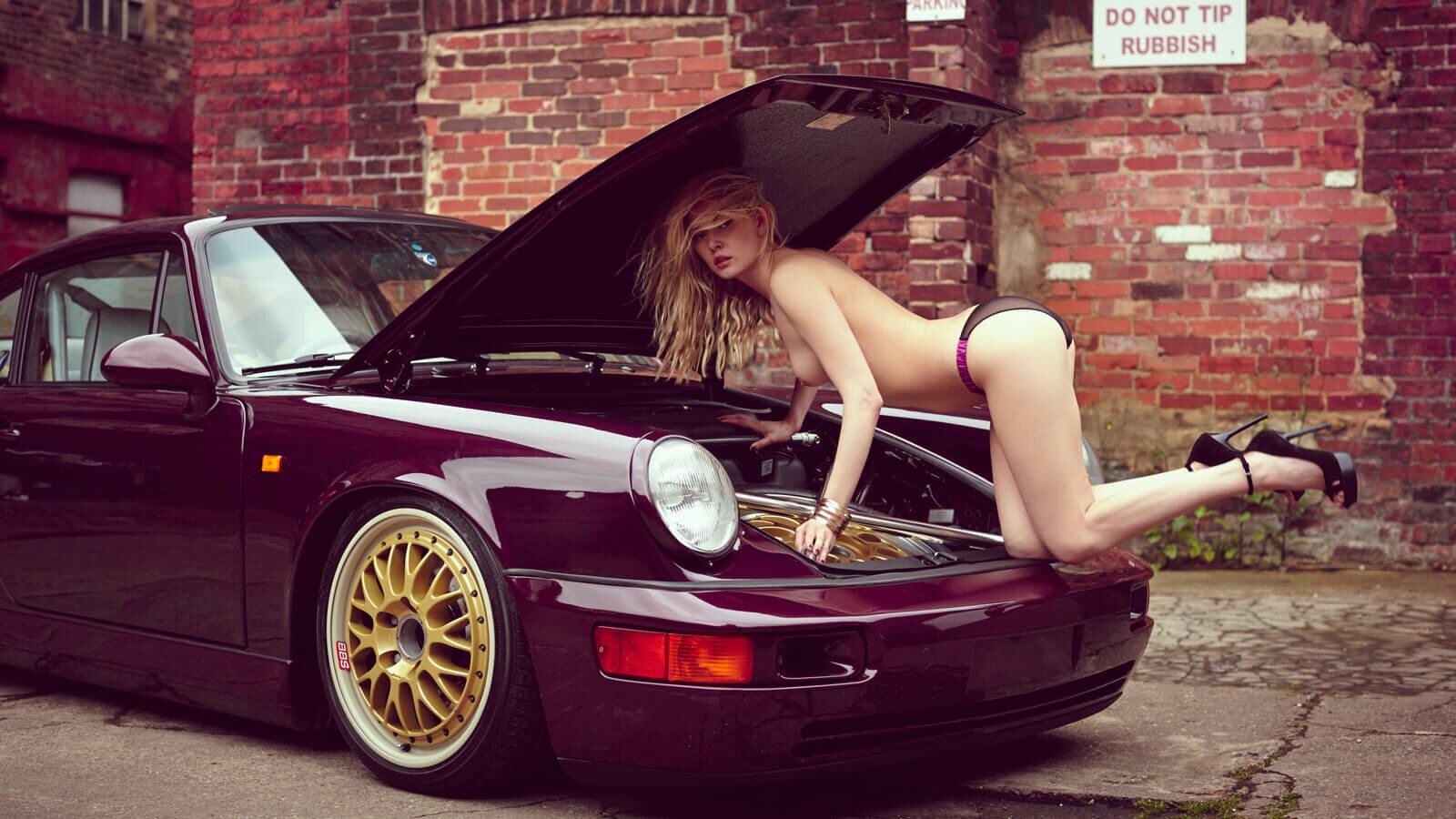 Just like salt and pepper, yin and yang, bacon and eggs, I believe, girls and cars are a suitable, natural pairing. I agree it can easily get cheesy (which I try to avoid). But I don't mind photographing something that's been done a thousand times before.

You can't reinvent the world. And that's not what it's about when photographing nude stories. I am definitely not afraid of shooting something other people might call 'too cliché'. And this is why I am currently searching for cool cars to work with. Because, I definitely want to have two stories with cars in my next photo book.

For my first book, I photographed with a classic Porsche 964 which was turned into a racing car. It had very rare rims and the varnish was seldom, too. For the photos I traveled all the way to Leeds in England.

The owner of the car, Rich, was super nice and had organized a dirty backyard as a location. It was great that he took care of the permission and everything, because the least thing you want is too many spectators to hang around where you photograph a nude girl and a car. It was cold, around 15 degree Celsius and occasional rain, but I learned that this is a typical summer in Northern England.

A few weeks ago, I heard the car had been sold to someone in Australia and then was crashed in an accident. Sad end, but the car continues to live in my photographs.

As my parents had a weakness for French cars, I grew up with Citroën. The 2CV has always been a very classic car to me. A good friend told me, he cannot imagine that such a small car could look sexy together with a nude girl. But I had this vision and so I did the shoot.

I was lucky enough to find owners of a Citroën 2CV in Ibiza and they let me photograph on their private property. I was asked not to take too long, so we made the shoot real quick. It took us only about 45 minutes. A big thanks to Raphaella. She was so focused, it was a pleasure to work with her. And I was lucky with the light as well. Even though we photographed in harsh midday light, huge fluffy clouds softened the light and it worked out fine.

Besides that, I have also work with an Alfa Montreal, a Ferrari, a Ford Mustang and even an Opel Adam. I don't know much about cars. Shame on me. But I think, I can judge if they look good and I am able to tell, if they suit a story I have in mind. I absolutely love to travel a small bit back in time, so the 1980s, my childhood, is a big inspiration to me.

The Lotus Esprit, introduced in the same year, I was born, would be such a car. Painted in red. Writing about it, I just picture the rear view of this car from Arcade games we played as kids.

And then there is the Lamborghini Countach. An Italian rocket. I wonder why cars don't look this hot anymore. And I am glad, I am writing and not talking about it, because I never know how to pronounce the name Countach correctly.

I also remember having counted the number of Audio Quattros on the streets when I was on holiday in Switzerland in 1985.

The Renault Alpine. Like a French version of Knightrider. The Citroën Ami. With a cockpit from the future. The Talbot Matra Rancho. A car I played with as a model car and I also remember it from the French movie 'La Boum'.

The list is endless and even I, who doesn't know anything about cars, can dream about the good old times.

I decided to make a call for cars: If you have a cool car from the 1970s or 1980s and if you are located in Europe, please think about if it would be possible to use this car in a shooting for my next coffee table book.

I would come around, bring a beautiful girl and shoot a series of images with the girl and the car. The photos won't be vulgar, but she will be nude. I will be super careful with the car and you can be on the set the whole time.

Normally a shooting takes around half a day, if I stick in one location. When shooting on several places, it can also take a full day.

When I work artistically, it's simply the model and me on the set, no big team. And I don't want to drive with your car, no need to worry. You will end up with lovely photos that are even published in a coffee table book.

I am open to suggestions, car brands and contacts. Do you have a car that could be suitable? Or do you know someone who does?